Yes, I finally thought of something convoluted to make the TomasinoWeb twitter account (located here) a little more interesting. As the Vice President of Online Operations (a really long title for a guy who controls a Facebook and a Twitter account of an organization), I was told to do something that would make our fanbase grow.

Usually, these "official" Twitter accounts of UST organizations are more formal and serious with their posts. So I thought "Why not go in a different direction?" If those other accounts are being serious with their tweets, I wanted to be funny. I wanted to give this Twitter account a human side instead of a formal "We are serious, we post news blah blah blah" feel to it. I want to connect with the followers in a way that would make them appreciate us. I want them to think that they can talk to TomasinoWeb informally, as a friend.

The other organizations are being serious and just simply posting news. I want the 2000+ followers to read something on the lighter side. 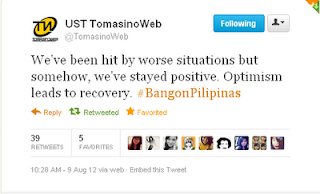 I want the followers to know that we try to bring you humor as well, something that everyone needs right now after that dire ordeal that was constant flooding and heavy rains.

Now I'm not taking credit for anything at all. I just copied what ECW wrestler Tommy Dreamer said about competition. If your competition goes one way, you go another. Others are being serious, we go with humor. Once the others start being funny as well, we'll be serious.
Posted by Ralph Corleone at 12:05 PM