No, I'm not going to tell you how my first week in UST went. That's a story for another time even though I've already discussed that in an old "How I Never Met Your Mother" post. This time, I'm gonna talk about Sprott Shaw college and how I chose to start over instead of finishing my literature course.

To be perfectly honest, I wanted to finish my literature course here in Canada however, as much as I wanted to, but I asked a career advisor about the status of literature majors in this country. She told me that they either end up teaching and nothing else. Sure, writing a book is always an option but somehow, being unknown gets you nowhere here compared to the Philippines. Shitty poems have been posted inside the bus. Shitty novels get published here all the time. Not that I'm saying my work is ten times better but I have no connections with anyone here so I can't have the stupid stuff I write published. That career advisor made me question if all those years taking up literature was all for nothing.

After a few days of mulling it over, I thought of taking up a different course. While searching for jobs online, I saw a ton of job openings in hotels at front desk and housekeeping so I thought I'd take up Tourism and Hospitality Management. First, I thought there'd be bitchy tourism girls in that course because I've experienced dozens of bitches from the College of Tourism and Hospitality Management in UST. Second, I thought I'd be laughed at by my classmates back in the Philippines because we all looked down in CTHM students for several reasons (that I'd rather not mention today).

I probably might get some heat if some of the people in that college somehow read this but Sprott Shaw College was not my first choice.

I originally wanted to enroll in CTC or Canadian Tourism College because it's closer to where I live. Had I enrolled in CTC, I would just ride two buses which takes about 30 minutes of travel time. However, when I got the tuition fee price, I thought "Okay, this would cause me some financial problems in the future, student loan or not." I didn't want to be in too much debt even though I had 10 years to pay off a student loan. I wanted to save up for a trip to go back to the Philippines to see my friends again and tell them I'm never coming back (Haha).

When I told them that I had to back out from registering for CTC, I was absolutely heartbroken because I was looking forward to this great tourism college. I thought that it was right for me because I was starting over and Hospitality there would get me a job. I tried to look at the bright side and believed that things happen for a reason.

My next choice was Sprott Show College. Their only branch that offers Hospitality Management is located in Vancouver, which was 70 minutes from my house. At first, I had no intention of ever going there but I was simply curious at their Hospitality Management course. I asked a question on their website with my contact details. Two days later, I got a call saying that they booked me for an information session. I thought "Oh damn it, I'd have to go that far?" I was forced to go to Sprott Shaw because I always kept my end of the bargain when it came to schedules so I didn't want to look like a jerk and not show up.

I showed up for that information session after a 70-minute trip from my house. I asked as many questions as I can:
"What jobs would Hospitality Management offer?"
"What kind of people do I have to deal with here? Are they in my age group? Are they older?"
"What about practicum?"
"Would I get morning classes or afternoon classes?"
"Are there hot girls here?"

Okay, maybe not that last one.

Surprisingly enough, I got great answers.
"Executive Housekeeper, Hotel Manager, Resort Manager. The hotel business is booming"
"International people, even some Filipinos. They're close to your age but there some who are over 40"
"One month of practicum after you've finished everything in the program"
"You'll get some morning classes and some afternoon classes"
"Yes, definitely. They've all been waiting for you."

Again, maybe not that last one.

I honestly thought that I'd hate that college because I got lost on the way. There wasn't a big sign or anything. It was beside a Starbucks that had an even bigger and more prominent sign than the college. It turned out that I would eventually enroll there and pursue a new career.

As said in the Sprott Shaw College student handbook, "You don't need to stop your life to change its direction."
Posted by Ralph Corleone at 1:34 AM

Things I See - It's My Keyboard 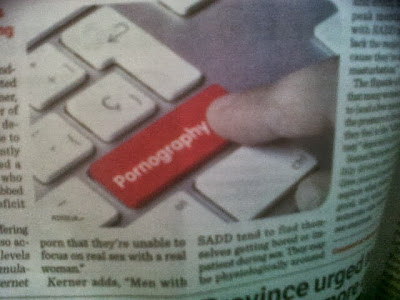 I wonder how this newspaper took a picture of me using my laptop.
Posted by Ralph Corleone at 11:45 PM

Email ThisBlogThis!Share to TwitterShare to FacebookShare to Pinterest
Labels: joke, Things I See

You will not believe how giddy I was when I saw a ton of Filipino food being sold here thanks to the local Filipino stores.

Nagaraya has never been one of my favorites but thanks to Canada, I've been deprived of cheap peanuts so I have to buy these for a dollar each.

Then I needed something to wash these down though. So...

HOLY CRAP, ROYAL! You followed me here! I love you! Okay, $1.08 seems a bit too much for a can of Filipino soda. 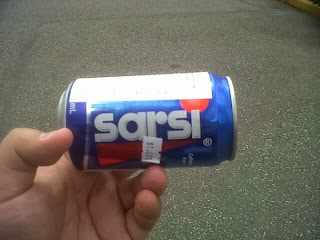 Speaking of Filipino soda, there is nothing more synonymous with Filipino soda than Sarsi. I couldn't believe I actually missed the taste of this cheap soda.

So I'm actually doing fine here in terms of food.
Posted by Ralph Corleone at 11:24 PM