"All those bright and shining companions! ...But not anymore?"

The Doctor: They leave. Because they should, or they find someone else. And some of them, some of them... forget me. I suppose, in the end... They break my heart.

I'll admit I'm not a good person to keep around. Sometimes I just like saying things out to the universe to keep me sane because it's better than keeping it all inside. So this is one of those times.

I'm not gonna say anything new about friendship - I know I'm bad at it - but I do miss my friends from time to time.

I used to have a good friend named Marie. A really good friend. I called her my person. I know it didn't end on the best of terms but I really do get reminded of her sometimes. When I was in the psych ward, I remember I missed Marie. I missed my old best friend who can talk me out of doing horrible things to others and to myself. I felt like I failed her again.

There are instances where you meet someone new and they remind you of someone you've lost. I've had that multiple times and I like to think it's the universe telling me to try again this time but do it better, don't do anything wrong, and try to avoid the same mistakes. I met a classmate named Erin and she was fantastic. Quiet but fantastic because she made me feel good about myself.

She had to drop out of the course because of personal reasons. When I lost contact with Erin, I felt it was Marie all over. It still stings.

Erin listened to me about a lot of things. She listened when I told her about my infatuation with my classmate. I would say "oh my god, Jamie doesn't reply. What the hell?" but she said she still wished things could be better. "I ship you and Jamie" she once said. And that's when I knew I had a friend who's worth keeping around because she supported my stupid crush. It felt nice to be validated rather than "she's too pretty for you". Erin felt like someone I could talk to about what I could've done in progressing this social link with Jamie. I always knew it wasn't going to happen but Erin humored me but made me feel optimistic about it.

Honestly, Erin reminded me of Marie. She was there to listen and I gave her the right to open up to me. I felt good about myself because someone saw me as a good person and it felt nice. Erin listened to me when I opened up and I listened to her when she had problems. I really wanted to be there for her. I really wanted to keep her around for years to come because oh my god, it's a new friend. 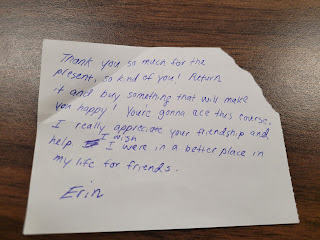 In the end, that's all we're left with. Moments. Memories. Things left unsaid.

Everybody leaves and it's always sad. Everybody moves on. Mostly from me. 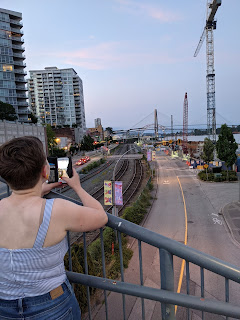 Look, I know you're never gonna read this but this is more for me and it's something I just need to say into the ether. Let me be selfish for once and let me not do things to make you happy. Because I really was happy to know you. And I won't forget the nights in New West. I wonder if it could've been so much more.

I only contacted you again recently to see if you were single. But you're not. And you're married now. And I couldn't accept that and have you in my life again at the same time because I know I'd be jealous.

That's how I want to remember you. The girl I really liked who I enjoyed meeting up at the pier in New West. The girl who at one point would drop everything for because I wanted to cheer you up. Everything was okay because I was talking to you. That's all I have now.

To paraphrase a Doctor, I just wanted you to see me. You never saw me. You looked at me and you couldn't see me. Do you have any idea what that's like? I'm not on the phone anymore. I was right there. Standing in front of you, telling you "Please just see me."

Clearly, that was a mistake on my part because I'm not allowed to be happy. I'm selfish, I know.