Again, a photo of Facebook has got me thinking. 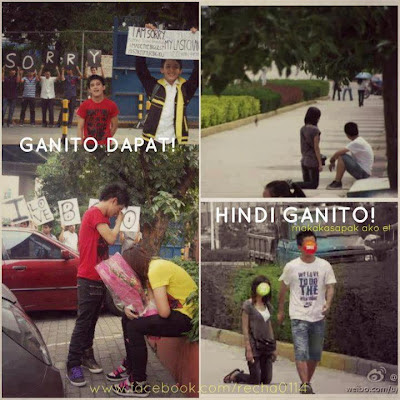 Awww, the first one is so sweet and the second one is so heartbreaking! Bless that guy for giving that girl flowers and damn that guy for ignoring her!

That's your supposed reaction. In reality, we are just outside looking in. We don't know the whole story.

For the first half of the image, the guy does a grand apologetic gesture with a sign that says "I'm Sorry" and flowers for a girl he must have hurt (Wow, he and I are so similar). However, if you think about it, did she actually forgive him? What did the guy do to have to apologize? What did it mean? Was it actually worth apologizing for? Did the girl even accept the apology? Did she say on Twitter that the guy ruined her day? We may never know but somehow, that moment is being played out as romantic and sweet without the proper context.

In the next half of the picture, a girl kneels in front of a guy and the guy doesn't accept the apology. He walks away. Outside looking in, the guy is being vilified as heartless but do we know their situation? Perhaps the girl was the one that did something unforgivable and the guy didn't forgive her yet but rather needed time to think things through. Maybe forgiveness was out of the question. Perhaps the guy didn't want their situation publicized in the middle of a parking lot. There are lots of possibilities. But really, it's not always the guy's fault but somehow, we're vilified as the ones who are always in the wrong and have to make the first move in everything, including apologies.

So what does this show? That guys have to be the ones to make the effort, regardless of what the girls did. What did the caption of that photo say? "Girls are girls and to respect them is the first thing that a guy should do." Yes, that is a good message but what if the girls are the ones in the wrong? Can't these romantic women have some sort of faults or are people so sympathetic to them that it causes double standards? If the woman didn't forgive the guy, surely, people would say "Wow, he must really be a dick! How independent of her!" Everyone should have the same ground of faults. There shouldn't be an unfair gender that gets all of the advantages.
Posted by Ralph Corleone at 4:12 AM