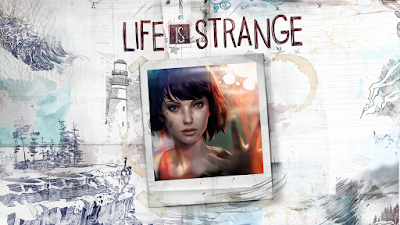 Don’t mind me, just doing the token review while goofing off.

If you’re like me, you know you love alternate timelines. A cavalcade of possibilities and finding out the consequences. The question “What if?” being constantly asked whether it’s in video games, literature, or real life, at least until the depression meds kicks in. If only we can rewind after we realized we fucked up. There has to be a better way!

Well, no, there isn’t. Sorry, you’re not The Doctor and no, that blue cardboard box isn’t a TARDIS, so you have to live with your decisions no matter how stupid or horrible. But alternate timelines don’t always have to be historically significant. Small decisions would still give you an alternate timeline. A relatively tame one instead of the “Let’s change the course of human history” kind but a timeline nonetheless. Luckily, Life Is Strange is here to show you how you can rewind time to a certain point and show you the consequences of several given choices.

Full disclosure: I never really wanted to buy the game as I was never really a fan of it last year. It was on a discount shelf at Walmart beside WWE 2K15 and Battlefield Hardline which gave me the thought “Wow, this game must suck if it's already in the bargain bin!” The disc was even loose inside so I feared that the game would be broken or scratched up at least. I told a friend of mine about it and she basically fangirled about the game with me. It’s an experience so I’m going to actively try to avoid any spoilers.

So yeah, Life Is Strange. What’s it about? You play as Max Caulfield, photographer hipster with a polaroid camera who goes back to her hometown named Arcadia Bay, twelve miles south from Whiterun and fifty from Midgar. If you reach Parts Unknown, you’ve gone too far. 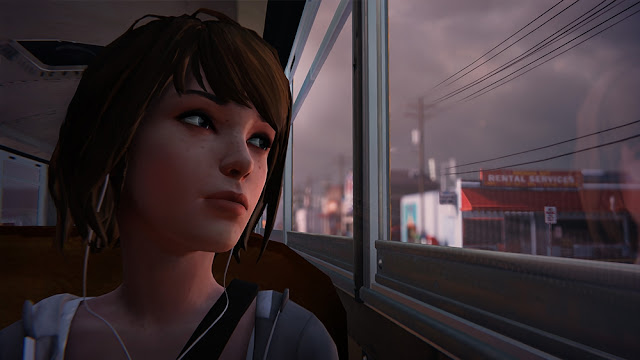 The game starts out with Max having a dream in class where she’s on the way to a lighthouse in the middle of a storm. Max goes to the bathroom afterwards and discovers she has time traveling powers. Not the kind of time traveling where she wasted 2 hours on the toilet, playing Seen or WWE SuperCard on her phone. No, even better - Max witnesses a crime taking place in the bathroom and rewinds time to prevent it. It’s unsure where she acquired her powers from but let’s just go with it because it’s useful.

Max can actually rewind time to a certain degree and change the outcome of dialogue choices. The rewind power, however, is limited. She can’t rewind when she leaves the area, for example. There are exceptions to the rule but that takes place when you least expect it. Failing a puzzle usually grays out the screen, forcing you to rewind and redo the whole thing again. This comes in handy when Max has to prove her powers to her friend Chloe by figuring out how many cigarettes or how much loose change Chloe has in her pocket.

These aren’t the Bioshock levels of consequences you’re used to but they’re consequences nonetheless. Well, I say that jokingly, of course. There are choices that affect certain situations to a dramatic degree but it’s best experienced firsthand instead of reading about it in a year-late review. 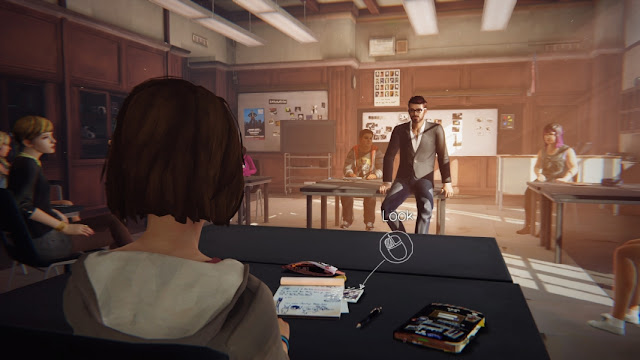 The game plays in third person where you can explore a small area and talk to different people like the friends of your bitch classmate, her bitch friends, or your nerd friends. Max also gives out amusing observations in her head when she interacts with objects in the environment like letters and signs. Exploration isn’t just the developers saying “Hey, look at this! Now look at that! You can look but you can’t touch.” Exploration rewards you with optional photos for you to take such as a skateboarder getting his balls burst or a simple bird’s nest in a junkyard. Each optional photo taken nets you an achievement/trophy for your collection. 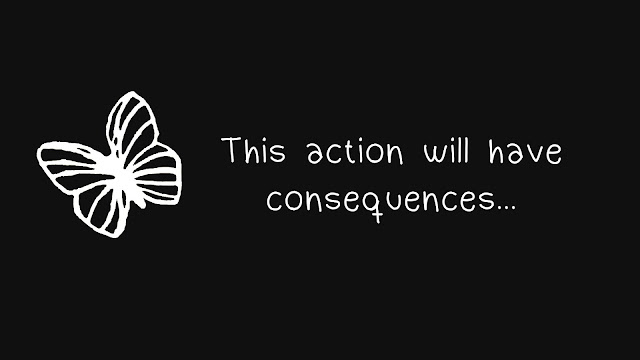 Failing to have a good conversation where you lack the correct information is an easy way to exploit Max’s rewind powers just so she can pretend she’s knowledgeable, that manipulative shrew. Rewinding also gives you teleportation powers but not in the Nightcrawler kind. You go to a forbidden place, get in trouble or trapped, then rewind to where you were. You still keep the items and information you’ve acquired. It’s only cheating if someone in-universe finds out.

I actually loved the story of this game, despite some of the dialogue being bad and repetitive. If I have to hear ‘Vortex Club’, ‘Kate Marsh’, or ‘Prescott’ one more time, I’ll blow a gasket and curb stomp someone Seth Rollins-style. The story is great as it tears your heart out while providing you with the occasional laughs here and there. The humor just makes you like the characters even more and when you do, that’s when the game tugs at the heartstrings when you least expect it.

One of the themes the game deals with is the traumatic effect of bullying and how victim blaming doesn’t really do much, especially when it leads to continuous bullying by other psychotic people and family getting involved to disown said victim. It’s really rather sad and you wish you could change it all.

The game is about making choices. Yes you can choose and rewind but the game keeps track of which choices you’ve made. The choices you make affect different parts of the game. Say you get revenge on a girl you hate on episode one. She’ll actually bring it up on episode five. The choices actually mean something and if you don’t like the choice you made for one reason or another, you have the option of rewinding and see if you like the alternative consequence. Speaking of choices, I’d like to point out the stupid choices that Chloe makes. Not gonna spoil anything but let’s just say she’s better off never leaving the house without a guardian. 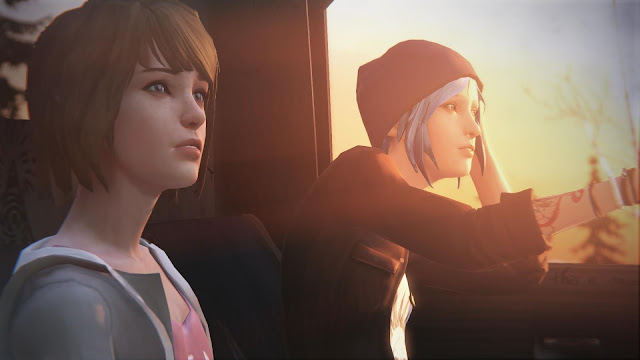 The big moral that I got from the story was that every decision, no matter how little, how rash, or how meaningful you think it would be, there would always be consequences. Good or bad, it’s all the outcome of your actions. Maybe things could’ve gone differently. Maybe you could’ve gotten everything you’ve wanted in this life yet you don’t realize that perhaps getting what you want would lead to an outcome that’s just as bad, if not worse.

At the same time, you’d think that you’re destined to have nothing go your way and you want to pin the blame on someone, something, anything. But bad things happen and sometimes there’s no one to blame. And sometimes, you can’t do anything about it. It’s not your fault. It’s not anyone’s fault. You just have to live with how this life treats you.

What’s that? Am I getting too depressing again? Sorry, how about an Ascension joke?

“Life Is Strange? More like Life Is Stupid, shaka-brah! Nobody’s more hipster than The Ascension!” 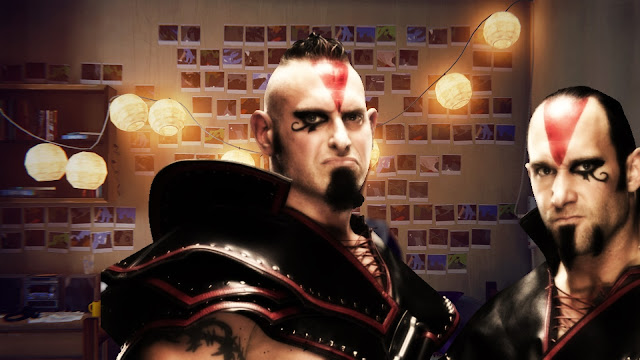 If you’re curious about which choices other players made, the game shows you a percentage of how many people chose which specific choice, which is like a scoreboard. Did you pick the bacon omelette or belgian waffle? Six or seven cigarettes? The possibilities! The power of choice is powerful, oh my god! Did you pick the same choices as the majority or were you a fate hipster by choosing differently?

Is it fun? Yes, definitely but even more so as a whole. If you’re considering playing this game, get all episodes at once so you get the full experience. What I love about the disc version of this game is that I didn’t have to wait for each episode to be released. I personally don’t like waiting for episodes for an extended period of time because I lose momentum. Losing momentum when playing a game makes you forget things, from little details to important facts. There is a journal feature in the game so that’d be useful in giving you hints or the like. Without spoiling anything, all the episodes in one disc really comes in handy when you have to talk down a friend from doing something drastic in a later episode.

It’s not an open world game but there is some exploration to be done, but that’s just the open world fanboy in me speaking so ignore that. Graphics-wise, they aren’t anything special outside of the scenery. Character models look better than Skyrim models so that’s something positive.

There are parts of the game that I dislike. Certain parts of Episode 5 is annoying, to say the least. Let’s just say I really don’t like playing Metal Gear Solid V with no weapons or Fulton recovery system on my emotional hipster adventure game. And as much as I like watching a beatdown of a pretentious fucker, repeating it over and over because the cop constantly gets outsmarted is annoying as hell. Parts of the story could easily have been avoided with someone saying “I don’t think this is a good idea so let’s not do it.”

If you’re unsure about the game and don’t want to buy all five episodes because of the possibility of not liking it, the first episode is always free. If you find the physical copy for the game, get that as well so you have something to hug as you cry about the game’s sad story.
Posted by Ralph Corleone at 10:04 PM