One of the things I love to watch are internet review shows. Now I've been a big fan of The Spoony Experiment (the main influence I had for my Art Appreciation self-portrait which I didn't do because reasons) and I tried doing what he does by reviewing shitty Sampung Sulyap movies.

I know I wouldn't do very well if I just follow what he does and imitate his work. I have to watch other people's shows as well. So I decided to watch "Atop The Fourth Wall" hosted by Linkara. It's basically a show where he reviews comics and with a little story going on as well at the end of his videos. 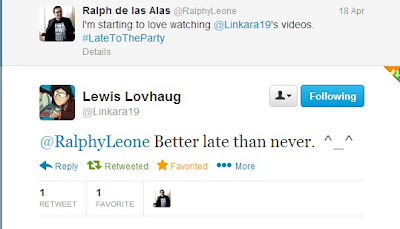 The first videos of Linkara I watched were his review of the Marvel crossover called Ultimatum (which was baaaaad.) 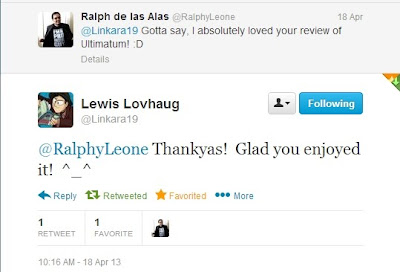 I recently started watching more internet shows because I don't really watch TV now aside from the occasional glance at the news. Another show which I started to watch is The Jimquisition hosted by Jim Sterling. I love his opinions and the points he makes. I can't tell you how many times I've agreed with what he says because he's damn right most of the time. His campy persona is also great. Thank god for Jim!

I first heard about Jim when my friend shared his various status updates to my news feed and I was intrigued. The cool thing was that my friend was Facebook friends with him. I thought I'd somehow send him a friend request that would never get accepted but several hours later...

Oh my god, I can interact with people I love watching. THIS IS AWESOME.
Posted by Ralph Corleone at 1:44 AM