With a Nintendo product, a huge requirement for it to be actually worth buying is a Pokémon game. At least, that's how I see it. Maybe that's why the Wii U failed as a console and not the 29 other reasons. Had Pokémon Ultra Sun and Moon been released on the Wii U instead of the 3DS again and maybe we'd still have better memories of the said tablet-tainted console

It was either Pokémon Sword or Shield. I bought Pokémon Shield because my friend convinced me in the stupidest way possible. We were at a GameStop when an attractive blonde woman was buying a new Switch and a Pokémon game. My friend was looking for games and we were in line so I might as well.

Gamestop Employee: What can I get you?
Ralph: Pokémon Shield please! Pretty lady buy Shield! Me want Shield!

That's exactly how it happened.

So far, the game has been easier than expected. There's a system that shares experience points with all the Pokémon in your team, which made the game easier. At some point, I felt like my Pokémon were too strong, around 8 levels higher than most of my opponents'. Basically, every time I got challenged by someone, I'd just be fighting for easy money with my team basically saying, "oh you don't know what you're in for, kiddo."
With the way I played the game, I had a case of 20 Pokémon as backups just in case I need a certain one at a certain level. It added more grinding in my case because I need to have backups. Say my main water-type monster was knocked out, I'd have another just in case so I still have a balanced team. The problem was making them be at the same level as the rest of the team. If my team were in the mid-40s, the backups would have to be trained to the same range so as not to easily get crushed.
The mindset I have is that I should always have reserves as well as a backup team to use. A B-team, to say. In a similar manner, it's like how WWE has NXT as a developmental brand. My backup Pokémon would "level up" and get experience to get ready for the main roster (my team). I even named the storage box "NXT" just because.
It took me 3 years to finish Pokémon Shield because I was bouncing in and out of it. There were times when I really didn't feel like playing the game. Then the pandemic happened which meant I along with millions of other people got invested in Animal Crossing: New Horizons. Being in debt with Tom Nook wasn't as bad as people made it out to be but that's another story.
With something as long as a Pokémon game, you'd wanna keep grinding at it. There were times I'd just spend a week playing it but for like 4 hours at most, each day which meant progress was slower than usual. I think it took a total of 70 hours or so in finishing the game? I remember being tired and just wanting to finish the game around the last gym. The only battle I had a tough time on and actually had was the final battle. I remember not feeling that sense of panic since playing Pokemon Crystal on the Gameboy Advance back in 2003 so it was a good feeling.
Speaking of Pokémon Crystal, that was the last game I've had a shiny Pokémon. Sure, shiny Pokémon don't really have anything beneficial aside from the aesthetics but at the same time though, the aesthetics! In nearly 20 years, the next shiny I got was Falinks who looks like a turd. I was disappointed at first. 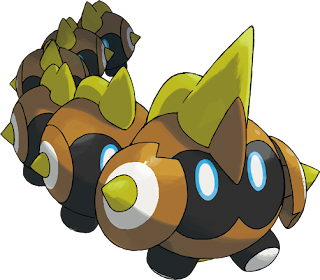 I grew to love him. He may look like a turd but he's my turd. I trained him as a backup because my Machoke needs a backup so Falinks is a good part of the team. Eventually he was part of my team when I beat the game, just so I can show him off. I remember not picking him for my team and felt like he was saying "Why won't you look at me, Papa? I only wanted to impress you!" Yes, Falinks, my son, I'm proud of you. You did well.
Did I enjoy it? Of course, I did. I would always have a soft spot for Pokemon games. A new version is coming out this November and I'm tempted to just pre-order it, just because. These have been a big part of my childhood and I'll never stop being a fan.
Posted by Ralph Corleone at 11:39 AM