Drunken mess aside, I wanted to go to the Philippines to be happy and not miserable if that made any sense. My mother and my sister couldn't go for reasons beyond their control so it was just me and my brother on the flight. We had to cancel the first set of tickets we had booked with China Airlines, which means we booked more expensive tickets with Cathay Pacific. We're big dudes and we had a row close to the window.


Sadly, there were three seats in the row so I had to sit beside some old guy who was miserable. "They're too big!" he said after slapping my leg multiple times. "I need to go to Perth and I need my sleep!"

So I thought, "Well, motherfucker, I can just knock you out with a punch or a superkick and then we'll both get some peace and quiet." Then I questioned why my go-to move was a superkick. I don't care about what he has to go through, it's not my problem, and it's no reason to hit my leg and whine that you don't have enough room. That's what first class is for.

To be honest, I was expecting to get a bump to first class just because there's extra room there. "Sir, this whiny old man is being cranky so would you like to get upgraded to first class for free?" The alternative was good enough though.

The general rule for seat changes is you ask the flight attendants nicely after the plane door has been shut. Once the plane door is shut, no one else can get in the tin can that's about to fly. Before takeoff, the whining old guy was asked to be seated at the first row. Sure he got leg room but the problem was that there was a family with a crying baby next to him and babies usually cry in flights because they have no sense of where they are.

So for 13 hours, I had two seats just for me while my brother got the window seat that he always loved. It was like flying first class because I had so much room. The tables were great for my tablet and phones. 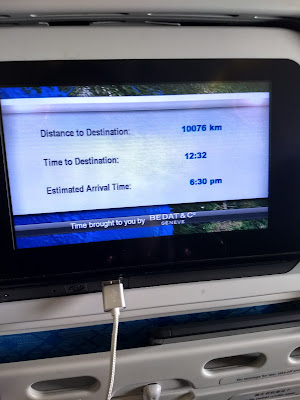 I haven't been on an airplane in years so seeing USB ports on the small monitors attached to the seats made me scream "OH MY GOD!" internally. The idea was there but the execution was not that well. When charging a phone through a wall outlet, the USB adapter would charge at a decent rate, giving you around 4 hours of charging time. The USB ports for the monitors charged really slow to the point where I actually lost two percent of my LG V20's battery life as it was charging, which made no sense. It wasn't much of a big deal since I came prepared for my phone's battery life dying early on by bringing in two more phones - namely a Moto G5 Plus and an HTC One A9. Sure enough, I had to rely on the Moto phone for the rest of the remaining 10 hours.

The best thing about having two seats for myself was sleeping during the flight. It was the most comfortable I've ever been since I had so much room that I can lean like a sack of potatoes to a barn wall. 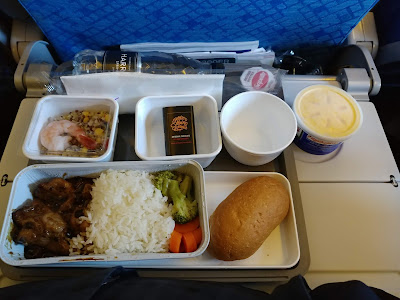 The meals were surprisingly good for airline quality. Other airlines I've flown with had below average food at best. Cathay Pacific's food actually tasted like food. It even came with ice cream, which was a nice surprise. When I last flew with China Airlines, there weren't many meals given. In Cathay Pacific, there was lunch, dinner, and cup noodles by request. I requested around five of those cup noodles because it's free and I just wanted to eat for the entire flight.

The only hassle about flying to the Philippines was the connecting flight and this was no exception. I didn't have much time to look around the Hong Kong airport because I only had an hour to spare before my next flight. It didn't help that the next terminal was further than expected so I had to rush. The lines for the security check didn't help matters at all and made me just wanna buy my own plane.

The connecting flight from Hong Kong to the Philippines was wonderful because there weren't a lot of people inside the plane which meant my brother and I were able to secure another row of seats for ourselves. It was another comfortable 3-hour flight or so. The food, however, was terrible. It was some sort of chicken pastry that I had never eaten before and would definitely not eat again.

Arriving in the Philippines was like waking up from a hazy dream. I was questioning myself if I were really there. It's been 3 years since I had last gone there. I didn't feel enthusiastic about it. Maybe I was just exhausted from a long plane ride. Maybe I just wanted a direct flight to avoid connecting flights altogether. Maybe I was just expecting to see familiar faces as soon as I got out of the plane. 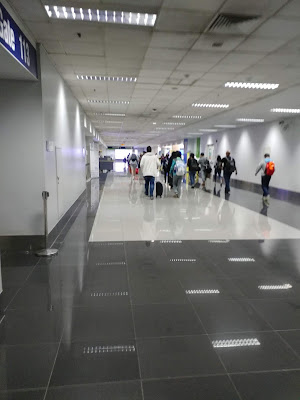 I was home. That's what mattered most.
Posted by Ralph Corleone at 1:28 PM