Things I See - My Bathroom Has 50 Shades

When I moved to my new place here in Canada, the first thing I did was look for old stuff that have somehow been left behind. Now, I was expecting a wallet or a gadget of some kind but that's just really unlikely since people are more careful with their electronics than they are with their children (Kids can't play mp3 files apparently).

I was told by the landlord that the previous tenants were Native Americans, hence the dream catchers hung on the bed rooms. The weirdest thing, however, was when I had gone to the bathroom to inspect the cabinets for other Native American stuff... 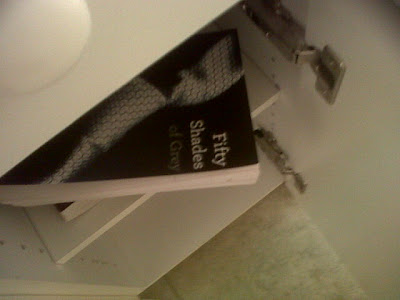 Now, I really hate Fifty Shades of Grey and everyone who reads it but dear god, that book was left behind in my bathroom. It's like, why would you read that in the bathroom of all places? While taking a dump, you're trying to be turned on? That's just weird.

And I can understand why that horrible book is left behind - it's because it sucks. Come on, you know that book sucks so bad that fanfiction is written better than that crap.
Posted by Ralph Corleone at 9:45 PM